Wall decorations and - design are as old as the humanity. Even in earlier times, in all cultures and at all times people have decorated and dressed their home.

Earlier it was expressed in the cave- and rock paintings, mosaics and frescoes, wall covering gilded, embossed leather and floral, mauresken ornaments.
The first wall papers that had been printed and were intended for households, come from the 14th Century.

At that time, the production of paper was still considered a skilled art.
Only the combination of printing and paper manufacturing allowed a kind of serial production.

In English and French paper manufacturers, Domino animal, the precursor of the wallpaper arise.

In the 17th Century these were printed with molds made of wood and have repeat pattern, which allowed a continuous surface design.This printing technique had been proven in fuel pressure.
End of the 17th Century the first wallpaper strips came in England on.
They were made of glued together, handmade paper sheets.
Moreover, with time, a more sophisticated hand printing technology was developed.
Hand painted or printed masks and wooden molds produces a wide range of different designs.

High pointof development were the panoramic wallpaper: printed with wooden molds, up to 32 strips of wallpaper, showed that time already impressive city views, landscapes and battlefields.
The production of continuous paper, was thanks to the invention of the rotary sieve ladle, possible.

So that the first step for the industrial production of the wallpaper was completed.
The in the beginning still operated by steam engines of Rationsdrucks enabled lower prices and increased production.

However, the preparation of the rolls was little rational and arts and crafts:
The massive wooden rollers were fitted from shape of engravers elaborately decorated with metal studs and filled with large areas of color felt.
Only the introduction of succession – printing of individual colors on modern, so-called fast-runners made the wallpaper production eventually flexible and efficient.
Prior to wallpaper the walls were dressed in the Orient with so-called Gobelins, these were tapestries.

These tapestries were very valuable, so they were never left behind of the frensh nobels, when they were travelling from one castle to another.
After these tapestries people of the Orient came to embossed leather wall coverings, which were partially gilded. 1425 wallpapers were first used in Lower Austria for wall design.

These were made of red and yellow parchment.
These were then replaced by a kind of wall covering made of fabric.
In 1469 the first papering experiments were lead through on the Middle Rhine.
And thus the wallpaper managed their breakthrough.
1509 documents were printed on the back and used as wallpaper in England.
Also came from China to Europe wallpapers that were hand painted.
Since the wallpaper was now becoming popular, in France and England began the manufacture of wallpaper.

King Karl the 1st commanded Jerome Lanyer of England to produce a wallpaper with wool and dust, this was the beginning of the ‘Verlourstapete’.
At this time all the wallpapers were printed by hand.
1750 were the technically advanced fabric printing method in England and France transferred.

But the first major wallpaper printing was built in Germany.
790 Jean Zuber tried to print glued Paper-rolls with a copper roll.
After several attempts, this method was then set, as there were wrinkles and the pattern was not clearly visible.
The wallpaper was valuable only with wooden molds, with this printing, the most expensive wallpaper in the world was produced at that time with this printing method: with a value of $ 40,500, it was sold at an auction.

1799 Nicolas-Louis patented a machine to produce paper from a large extent.
By 1830, this machine was added to the wallpaper production and sat through the whole line.

In the 19th Century were first mass productions of wallpaper possible, designed by the printing press.
However, this breakthrough had negative aspects, because the artists of the time got less and less jobs for wall design.
From then on, the wallpaper was very popular in the market and became more colorful and flashy.

In the beginning, the dimensions of a role in length were 8.16 m in length and 47 cm width. The quality of the paper machine was of medium to low quality and its surface was smooth. In contrast to today's wallpapers progress is so huge. 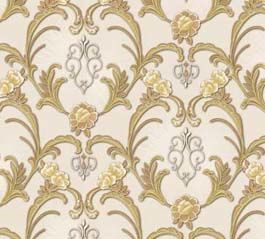 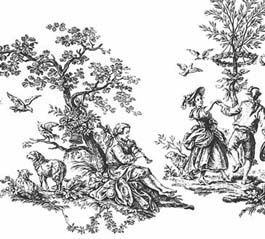 The time of "Rocaille" and "Chinoseries".
In the late Baroque the heavy and ornate shapes transform into light and petite.
Typical for this time is the "rocaille", an asymmetrical seashell motif.
But also popular were floral patterns and the so-called "Chino series".
This hand-painted, Chinese wallpaper with Far Eastern and exotic flowers painting were considered as term of luxury. 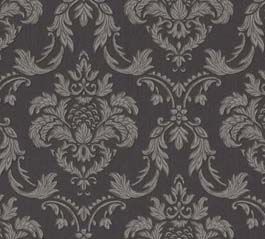 The time of symmetry and symbols of domination.
Based on the French Revolution rethinking how to rectilinear shapes from antiquity.
Elements of Greek painting and symbols of domination such as columns and laurel wreaths are ordered to strictly symmetrical patterns.
Typicalis a at the center axis symmetrically mirrored ornament, called grotesque.
It shows imaginative motives of Roman origin and tender tendrils. 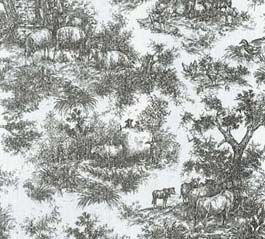 The time of the panoramic landscape wallpaper in the landscape room.
Representative with the seriousness of the Napoleonic empire also breaks the Biedermeier style.
The interior is an expression of a virtuous, simple lifestyle.
So also the former wallpaper: Romantic motifs from nature and small patterns are popular.
Asked are landscape rooms that open the room with panoramic wallpaper the outside. 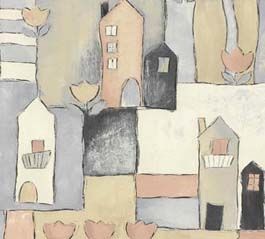 Time of the ‚rotary printing’ and the style mix.
Patterns, proportions and colors are combined exactly as unconnected as the successive styles:
Whether Neoklassizmus, or neo-colonial exoticism: it prevails Stiloluralismus.
At the time of change is happening, the development of the rotary print’ happens: The Industrial Production of wallpaper starts with the ‘glue pressure wallpaper’. 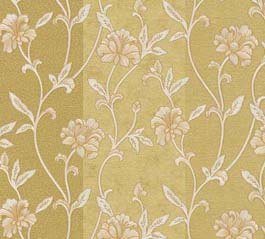 Time of the organic shape.
This generation stands for brightness and clear shapes.
Right angles and symmetry are replaced with floral ornamentation.
Organic shapes swing over furniture, objects and walls. 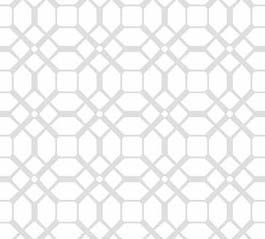 Time of the new objectivity.
A variety of unusual wallpaper designs is created.
Organic and Geometric combines and gets abstracted.
Wiener Werkstätte and the Werkbund prepare the way to a new objectivity.

Time of "Le Corbusier" and “Bauhaus”.
This design is arranged in its color and form language of the substantive purpose.
The one-colour wallpapers of Le Corbusier and the Bauhaus wallpaper collection are legendary.
They are the beginning of today's plain wallpaper as an alternative to painted walls. 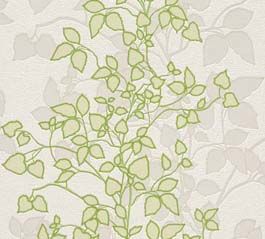 Time of the variety, quality and practicality.
The current quality characteristics of modern wallpapers are the variety of designs and patterns, the ease of processing, for example with the non-woven wallpaper and sophisticated collections.
In addition, the quality of material of our modern wallpaper and the know-how of production, such as embossing and print quality.