The entire room can be changed by a wall design. You can choose according to your taste, your own patterns and colors.

At time are different colors and patterns trendy. But with such a wide selection, the choice is rarely easy. If you watch your home exactly, you can not with patterns and colors only beautify your space but also influence unfavorable floor plans, ceiling height and lighting conditions.

So it is possible with wallpapers and paint to make your rooms homelike but also change it visually. Our space perception goes far back into the past and is still influenced by the previous experience of nature and of man.

Bright is the sky above us and the dark floor beneath our feet. If a room is rather large and flooded with light, we feel insecure,lst but also free. In dark rooms we feel cramped, and also protected. Also the basic instinct corresponds to the order in which we capture the room: In dark spaces: First we look on the ground in order to test whether it is stable. After that we look around and capture the entire surroundings, search for eye contact and collect information. Once the orientate gets boring, only then places the ceiling in our perspective. On this visual sequence: floor-wall-ceiling, the interior design takes influence from it. So for example, you watch at first at a wall with strong wall colors or fancy patterns on the wall, than on the ground. Besides of view and motion control you can also influence the entire impression. For example, you can easily cover up small architectural inconsistencies and shortcomings. 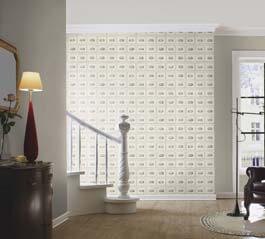 A dark floor creates a foundation which gives the room stability and security.
If the walls are brightly decorated, the room appears generously and wide.
Are Floor and walls darker than the ceiling, the region is becoming optically height, which is called the “nest-effect”.
A dark ceiling acts as a protective roof and rooms with high ceilings can seem lower.

If the ceiling color for example apperas on the furniture appears again, this is creating a balance and the ceiling seems less solitary. 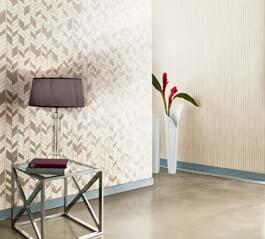 Patterns are in many cultures and religions of fundamental importance.
Geometric patterns are popular and with representational motifs the image is the main message.
Patterns can change greatly over:
Big patterns in dark shades reduce the wall surface and move the proportions.
Small patterns, cause the exact opposite, they expand the space visually.

Other types of designs include: static, abstract, organic, floral, ornamental and random. 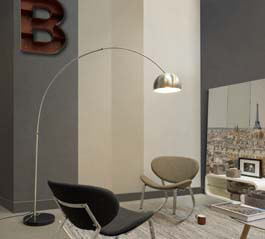 A wall that is accented dark, shortens the room visually.
The accent wall pushes the visual look to the center of the room, contrasting colors are extremely concise in front of such a wall.

Are accent-wall and floor of similar design, a visual connection is created that reduces the space eventually, but lets him seem cozy. 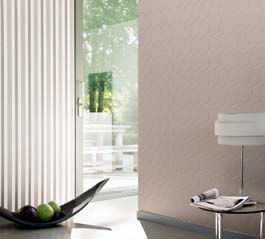 Longitudinal strips along the room let him look higher.
Tuck cause the opposite effect: the area appears lower and wider.
Peace and quiet you get with a subtle, horizontal emphasis in the lower third of the wall surface. 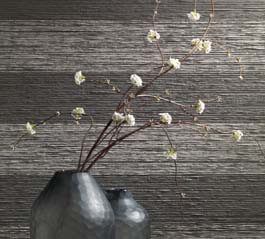